Lakes in Northern Italy around L’Albereta

L’Albereta lies in the heart of what it is a proper district of lakes in Northern Italy, with its magnificent colours and fascinating history. Lakes Maggiore, Garda, Como and Lake Iseo are the largest, but the Lombardy region is dotted all over with lakes of all sizes and depths. Since time immemorial, these lakes have aroused the wonder of generations of visitors from Northern Europe, who have come here and been captivated by their charm. The lakes of Lombardy were dubbed a corner of paradise by 19th and 20th century travellers from abroad who, having crossed the mountain passes, were left speechless by splendid Mediterranean vistas of fig-trees, palms, bougainvillaea and lemon-trees. Today, though times and much else have changed, these lakes in Northern Italy have lost nothing of their fascination. Thanks to the beautiful landscape and a particularly mild climate, they still arouse a sense of amazement in those who travel to this lovely area. On the banks of these scenic lakes lie picturesque ancient villages, many on stretches of land delimited by rugged promontories. There is no lack of postcard views, with flower-decked balconies, Italian gardens and nobles’ villas reflected in the water. A synaesthesia of colours, smells and sounds that is truly unforgettable. As elsewhere in Italy, the artistic and environmental heritage of these lakes is enhanced by a unique variety of culinary delights and fine wines, all eager to be enjoyed.

Lake Iseo has a rare fascination.

By the will of the people, who still consider it a place to inhabit, it has remained off the tourists' beaten track. This becomes immediately obvious as you stroll through the village streets, which lack tourist shops yet are animated by a genuine sense of life, with daily encounters, shopping in the market square, a glass of wine with friends before dinner, and little inns, some awarded stars, in which to linger and enjoy some freshly-caught fish and a glass of fine wine from Franciacorta. Iseo is considered to be the main town on the lake, with its tiny ancient streets, romantic squares and peaceful votive chapels. A regular ferry service operates between Iseo and Montisola, one of the lake's great surprises. It appears at first glance as an imposing mountain on the opposite shore, but from the boat you soon see that it is actually an island rising from the lake, what geographers call Europe’s largest and highest lacustrine island, with a surface area of 4.28 square kilometres, rising to a height of 599 metres. An island with 11 villages, 1,830 inhabitants, a castle, 8 churches, 9 springs, 16,000 olive trees, a handful of vines, and chestnut woods everywhere. Cars are banned and only the residents can use motorcycles. Visitors are allowed to explore the island on foot or by bike, or using the public minibus service. An ecological paradise with a vocation for agriculture and handicrafts. The island has earned itself worldwide renown for its fishing-nets and two-bow rowing boats, the fishermen’s naèt, which can change direction without going about. Perched on the mountaintop is the 5th century sanctuary of the Madonna della Ceriola, not only the island’s oldest church, but also an excellent belvedere and an interesting museum of local history, written in the votive offerings left by grateful believers. In the 19th century Montisola witnessed the love affair between a Polish musician and a French writer, both destined to future glory. Her name was Aurore Dupin, but her nom-de-plume was George Sand. He was christened Fryderyk Franciszek, but he preferred to be called Frédéric François Chopin. The lived together in the little village of Sensole and their love story was turned into a book that Sand set here and entitled Lucrezia Floriani. From 18th June to 3rd July 2016 Lake Iseo was the frame of the Bulgarian artist Christo project "The Floating Piers": 4.5 km of floating piers covered with iridescent yellow fabric, which linked Sulzano to Montisola and small island of San Paolo.

From literature to nature, everything invites one to enter a magical dimension, well worth coming back to.

Crystal-clear water that’s never too cold. Sunny beaches, a mild climate and Mediterranean vegetation make Lake Garda comparable to a small-scale sea, set between the last spurs of the Alps and the Po plain. Lake Garda is actually the largest lake in Italy, lying at the foot of the Alps, in a privileged position in the heart of North Italy, a mere 40 km from L’Albereta and the main cities of the North.

Lake Garda regales visitors with magnificent scenery, abounding in rich colours. It is delimited to the north by the majestic Brenta Dolomites and to the south by the gentle slopes of the morainic hills. Lemon trees, oleanders and bougainvillaea flourish here thanks to the mild Mediterranean climate. And extensive vineyards and olive groves produce excellent varieties of wine and extra-virgin olive oil. Strolling through the historic centre of one of the ancient lakeside villages, enjoying a ferry ride and choosing one of the many itineraries on offer to explore the surrounding area are the best ways to enjoy the lake’s wonderful atmosphere and spectacular landscape. The lake offers numerous opportunities for sports lovers. Sailing and windsurfing enthusiasts will find the ideal conditions for an exciting challenge against the wind. In recent years the lake has become the favourite destination of mountain-biking enthusiasts, and it is renowned all over the world for the exceptional quality of the golf courses here. Tennis, paragliding, free-climbing, scuba-diving and many other sports find ideal conditions here. For the not-so-adventurous and lovers of the outdoors, there are many nature reserves and amusement and theme parks.

Last but not least, Lake Garda is renowned for its dolce vita and lively night life. Music, shows and other events animate the evening hours. Things get going at sundown with an aperitif, friends gathering for a drink in one of the bars along the coast. They then move on to one of the excellent restaurants for which the area is renowned. And the evening of course ends in one of the numerous local discos or nightclubs that have brought fame to Lake Garda night life, dancing until the sun comes up!

Lake Como was known in former times as the Lario. At 410 metres it is the deepest of Italy’s three sub-Alpine lakes and one of Europe’s deepest. Its huge mass of water affects the local climate which, in the central area and on the Bellagio promontory, is very similar to that of the Ligurian Riviera.

Laurel and olive trees grow here, the gardens are full of palms and tropical plants, and it comes as no surprise that the area abounds in nurseries. Besides its natural beauty, Lake Como boasts an original and fascinating cultural heritage which can be divided into at least three main categories. The first, most evident, one comprises the villas of Lake Como, which have no equal in the world in terms of architecture and landscape, and the treasures they contain. Secondly, more concealed and refined, comes the area’s incredible concentration of Romanesque churches, bearing witness to an anything but dark Middle Ages. The third, more evocative and intriguing, category comprises numerous military fortifications from various eras, each with its anecdotes and legends, bearing witness to an adventurous and turbulent past. Three artistic heritages that make this area a very interesting and culturally stimulating one to visit.

In all seasons, the relatively small province of Como offers visitors rich treasures and unimaginable experiences, magnificent landscapes and concealed beauty spots, all waiting to be discovered one by one.

Lake Maggiore was the birthplace of the renowned Borromeo family, which had numerous residences built here, many still bearing witness to their prestigious name, with magnificent palaces on the islands, prized Italian gardens and the imposing Rocca di Angera.

The lake is best enjoyed from the lake - and from the lake you get the feeling that time has stopped still. The best examples are the monastery of Santa Caterina clinging to the rock, Stresa and the tiny Borromeo islands steeped in history, and the Cannero castles, ancient hideouts of the Mazzarditi brothers, notorious pirates from the Verbano area. A vast historical and artistic heritage of villas, castles and archaeological sites, proving that the area has been inhabited since prehistoric times, holy routes and religious sites inviting us to retrace the steps of the Medieval pilgrims.

A wealth of treasures that have long attracted famous visitors, including Goethe, Stendhal, Fogazzaro and Manzoni. 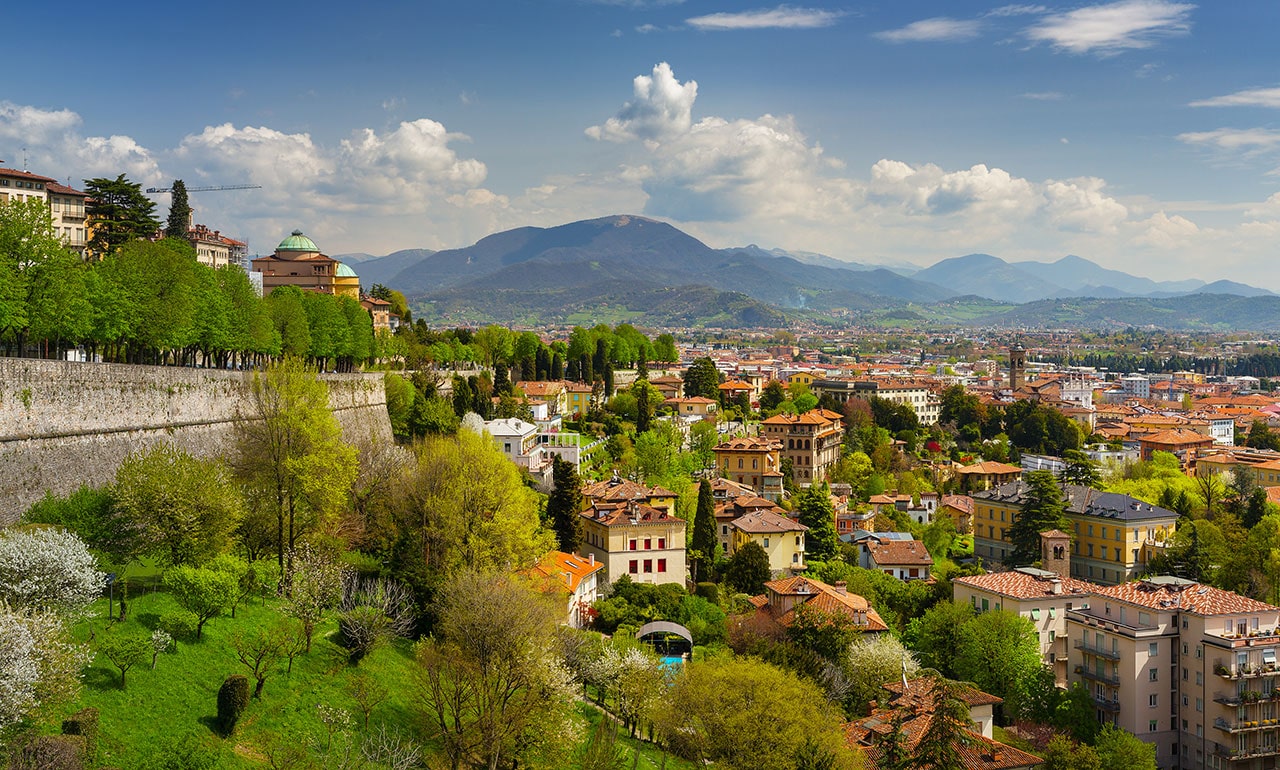